My last post was written at an albergue computer with another pellegrino hovering over my shoulder. A hurried post to let my family and friends know I was still walking although the boots had long been discarded for the walking sandals.

Looking back at Day Two…

Today I digress back to Day Two. At the start of the day I remembered the words from the guide book – “take care not to over extend yourself on these first few days of your journey”. Only now do I see the words “allow 2 hours for a slower ‘end of day pace.’”

We left Rosncesvalles in the dark; fiddling around with headlamps which didn’t want to go, trying not to trip up on the exposed roots on the narrow woodland path to Burguete.

My original plan included a night in Burguete channelling some of Hemingway’s writing genuis. In The Sun Also Rises Hemingway his main character Jake Barnes describes the surrounding countryside, trout fishing and the long ardous journey by bus from Pamplona. Having just finished the book I should have realised that our trip was going to be hard.

Coffee & croissant breakfast in Burguete – watched over by this beautiful Malamute. 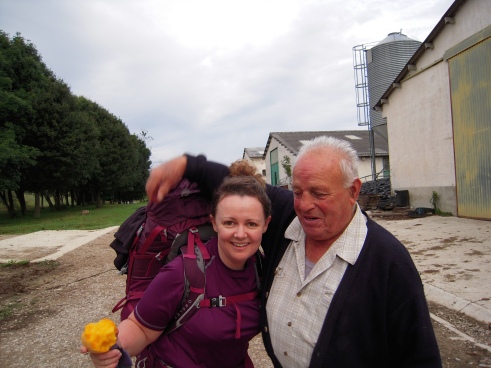 Local Paysan blocks the exit of Burguete – the price kisses and pictures (girls only).

Walking wise it was a hard day – the constant ascents and descends for the first 17-18 kms ardous. This was my first day at carrying my backpack. Somewhere on a ridge top I stopped took off my boots for few repairs. Mike and Lisa had New Zealand hikers wool (must product) which they doled out generously to Dean and myself, relieving early hot spots on our feet.

It was the long descent from Alto de Erro 810m down to the rio Arga and small town of Zubiri at 500m that probably damaged my left heel. Even though Lisa and I had began walking at the slower pace than the guys, we were making hard walk of the descent. Mike remained within sight of “his two girls”, but somewhere on the downhill trail Dean had kept his own walking pace and gone on ahead.

For the final few kilometers we were walking along rolling woodland trails which followed the river however, the relief was palatable when we finally reached Puente de la Rabia the medieval bridge over the Rio Arga which leads into the village of Zubiri. On the banks of the river relaxing, waiting for us with cigarette in hand was Dean. Michael instructed us to get off the boots and our feet into the cold water. My left heel was ripped to pieces – the boots should have been biffed months ago! But the cool water took the sting and heat out my feet and the tiredness began to wan.

While Lisa and I did yoga stretches on the springy river bank grass, the guys went and found an albergue for the night. We had a room off a room. Four single beds and three sets of bunks. I was lucky enough to get the bed in the corner.

Then the daily routine of organising the laundry (washed and dried for 6 Euros), booking a pilgrim meal and going for a beer began. Lisa and I left the boys at the bar and went in search of a pharmacy – the verdict a deroofed blister which required anti-biotic cream and special plasters. The only way I would be able to continue walking in boots is to overlay the bandaging with hikers wool.

Back at the bar the guys had moved onto cider and our new Camino friend Oscar from Spain had joined the party. The owner of the bar had broken into his private stash of cider and bought out a bottle.   Pouring the cider is an artform which I should have video’d. Oscar raised the bottle above his head (right hand) and took the glass down to shin level and poured – fluid in motion. As we left the owner gave Mike another bottle to take on our walk – generous offer, but sure to cause fatalities.

At the pilgrims meal we met a lovely Italian couple, Franco and Chiarra, our journeys would become intertwined over the next week or so. But it was the German couple who had done the walk before and demanded more bottles of wine for our table that made the meal into a party. I could barely keep awake. Lisa and I went upstairs, Franco and Chiarra back across to their albergue while the others headed for the garden – bottle of wine in hand.

Later we slept to the sound of thunder, raindrops hitting the window panes and Mike’s snoring.

2 Responses to “The Camino Way: limping into Zubiri”