Most major cities have long roads that connect the Central Business District with the outlying suburbs. Even though they get clogged with traffic during rush hours, they still maintain little pockets of local shops. Dominion Road is one of those roads.

It is, for me, a relatively rare event to park the car and go walkabout on such a road. When I was tripping around Spain and France last year, I never thought twice about walking about and taking photos, but it seems such a strange thing to do on a Saturday morning in my hometown. However, I responded yes when the chance came to join some photographic enthusiasts on a snapper walkabout on Dominion Road.

We met at Potters Park, arranged a rendezvous for a show and tell session a few hours later, and then wandered off in haphazard groups. I headed west on Dominion Road with a small group. As we crossed the Balmoral Road intersection, I felt as though I had walked through a door and emerged on the outskirts of Hong Kong. Only from memory, the air was smoggy, the buildings higher, and my senses were overwhelmed by the constant cacophony of voices and traffic noise and flashing neon lights.

It is nearly twenty years since I was in Hong Kong; however, I still remember my ex-husband Greg, and I took the MTR to a small village near the China border. The plan was to visit a local temple. It all looked so simple in the guidebook. We disembarked from the MTR and emerged into a small shopping centre that sat beneath high-rise apartment towers. To the left and right of us was a multi-layered expressway. Ahead of us, the wayfaring and shop signs were written in Chinese characters. Looping around in my head was a story Greg had told me of his trip five years early to the Shanghai zoo; he had spent two hours looking for it only to find out he had been walking around in circles and had stood outside the entrance many times.

We headed for the nearest shop to regroup and eat. In the end, my sense of foreignness and the feeling our presence was not welcomed saw us abandon our plans. Looking for something familiar, I had spied a bus depot and buses with numerical signs. With the help of the guidebook, we managed to work out which bus would give us a scenic ride back to the centre of Hong Kong.

Back on Dominion Street, the elegant Chinese characters accompanied by English signs lost their foreignness. We photographed shop windows, some of the group venturing inside the doorways, although I was reluctant to venture into the Tekkoon Teashop. The porcelain teapots looked fragile, and I felt like a bulldozer with a DSLR camera in one hand and a bulky bag over my shoulder. 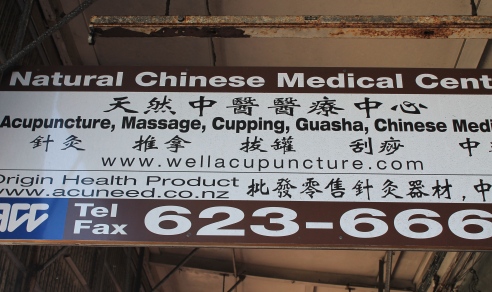 Walking allowed us to discover the diversity of Dominion Road. At Artrageous Tattoo and Body Piercing, home to two award-winning tattoo artists, we were invited in to take photos of the studio. A few doors down, the front door of a second-hand bookshop opened, the owner walked out with the street sign and invited us in to look at his photography books. I introduced myself, he reciprocated and together, we looked at a book of black and white photos circa the Andy Warhol factory period. I spied guitar stands holding two beautiful guitars in the corner of my eye, realising I was talking to the legendary Graham Brazier. The man who penned some of New Zealand’s most iconic songs and embodies a very Lou Reed vibe. Given his photography books included French fashion photographer Guy Bourdin, I wanted to continue fossicking. However, this was overridden by the desire to shoot more photos.

I caught up with the others taking photos of small fluorescent yellow and pink wrought iron tables in the next block. Next, I stopped to take pictures of a table outside of the Big Beat Café. 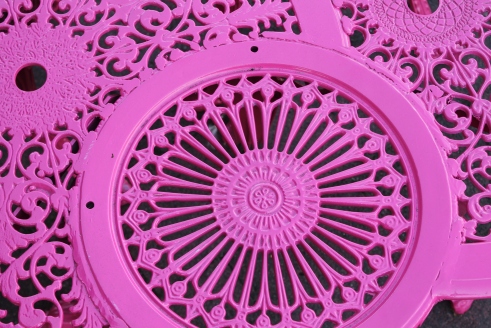 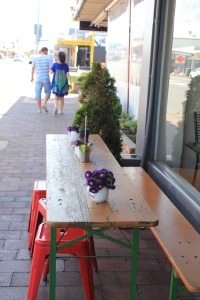 The owner, Paul, suggested I follow him and take photos of his courtyard garden. Inside the café, the walls were lined with prints of late 60’s artists, Mick Jagger, Chrissie Hynde; however, Johnny Cash’s mug shot placed next to the iron bar grille door inspired me and became my “show and tell” photo. 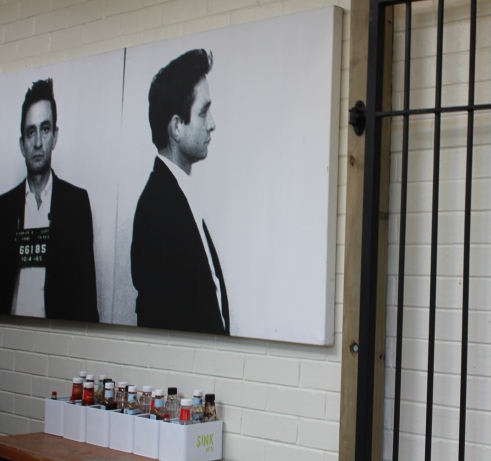 Paul’s garden is an oasis of sub-tropical plants; bright coloured bell-shaped umbrellas emphasise the exotic theme. We chat about gardening, and I get some great tips on Hibiscus trees. By this time, I’m joined by another photographer, seeing our joy from the garden. Paul tells us about a nearby garden, which is open on Saturday’s for public viewing. The walk to this garden leads us off Dominion Road, slightly changing the nature of the walkabout while still maintaining a sense of discovery. 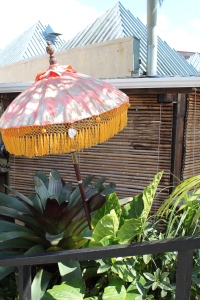 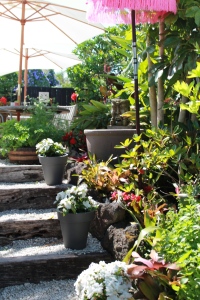 The next time I’m stuck in traffic on an arterial route, listening to the radio and ignoring the local shops, I will come back to this day. A day of surprises, fun and some really cool people who, together with Asian immigrants, have created a diverse and vibrant community.