“What good is the warmth of summer, without the cold of winter to give it sweetness.”
― John Steinbeck, Travels with Charley: In Search of America

Yesterday morning like most New Zealanders I thought my bedroom had morphed into a fridge, meanwhile in the South Island others thought they had slept the night in the freezer. I checked my cellphone, white print Mostly Clear 3° on a black background confirming another unusually freezing morning. Then I looked outside and saw a clear blue sky, the sun easing over the horizon and thought “it’s a Bethells day!”

I am a huge fan of Northern Exposure, a 1990’s television show set in a small Alaskan town and I have lived in England so I do understand wind-chill factors and the importance of dressing correctly for the cold. However, I am an Aucklander born and bred, the minute we see clear skies our skin tingles with the memory of sunrays and we long to get outdoors.

No I am not been overly harsh, I do have proof. Yesterday afternoon as I was driving home a local television reporter (Mike McRoberts) had a radio spot to promote the six o’clock evenings news footage of the sub-zero temperatures and resulting hoarfrosts in the South Island. Mike who was staying in Christchurch had like myself looked outside, saw the clear skies and decided it was a perfect morning for a run. Mike got 100 meters down the road before the supreme cold overrode his brain’s memories of summer warmth and woke up to the startling cold; it was minus 3°.

Out on Bethells Beach, dressed appropriately, beanie, gloves and padded jacket; the wind was biting. The horizon of the Tasman Sea was jagged, closer in the surf breaking in a haphazard motion sprayed sea foam into the air. Walking beside me along the black sandy coastline was my oldest and very close friend Jude.

We passed rock outcrops, which looked like an art installation as opposed to a random spill of tidal dump. These volcanic rocks are carried north from Taranaki (lower North Island) by the coastal currents.

Further down the beach we passed a tramping group each carrying back packs to ensure comfort if marooned at the far end of the beach. Down towards the end of the southern end of the beach near the large cave in the hillside we stopped to admire a beautiful slime green covered rock. 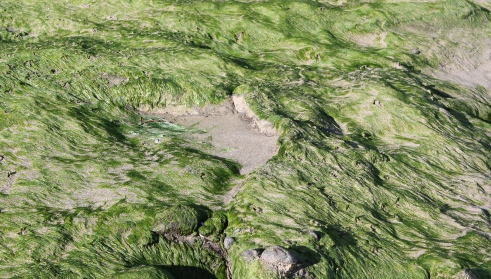 On the way back up the beach we sat for awhile on a log, its bark-polished silver from the iron-ore black sand modules stirred up when the prevailing westerly wind roars in from the ocean. Jude said, “This is the way it is supposed to be.” I murmured, yes.

This afternoon as the temperature drops down to 11° and grey clouds obscure the blue sky, I ponder on John Steinbeck’s comment, then form my own quote: “the sweetness of sunshine and winter cold conjure magic moments.”

The beach is reached by walking (as these fishermen are doing) alongside a river stream flowing from one of the two tributaries (Mokoroa and Waiti) of the Waitakere River.