The University Creative Processes paper first assignment is a ‘Me’ box; an original creative work, which allows the tutor to get to know their student. For my assignment I choose a round hatbox, treating the inside as a globe by dividing it into two hemispheres. Each sphere was a separate world, filled with found objects, stories and music to demonstrate who I am in my spiritual homes, France and New Zealand.

inside the ‘Me’ Box….stiletto shoes for Paris – jandals for NZ.

This heterogeneous mix of belonging is the reason I love the Heart of the City re-branding of Auckland, precincts and quarters. While Auckland will never be Paris, the craving up of Auckland’s Central Business District into areas allows our city to develop unique and special areas for both locals and visitors. Thanks to the team at Auckland’s Heart of the City our city is now grown-up and interesting.

There are seven precincts – Arts & Entertainment, Queen Street, High Street, Britomart, City West, Victoria Park and Waterfront – within the Heart of the City each one possessing their own individual personality and style. Sitting on the eastern peripheral is the Learning Quarter, home to Auckland University, Auckland Technology University and Albert Park.

The Auckland University’s Clock Tower, built in the early 1920’s was uncharacteristic of the architecture of its time that is was often referred to as a very ‘un-British pile’. Thankfully the stately ivory tower of Auckland University’s Old Arts Centre is now an Art Nouveau treasure. However, at the time the buildings design attracted a great deal of controversy. Partly because the Arts Centre design competition, architects Roy Lippincott and Edward Billson were American but mostly it was their cutting edge design. Comments regarding the design included ‘Maori Gothic’ or it’s a wedding cake. Thankfully the judges had foresight, and recognized the architectural beauty of the ‘stately’ ivory tower.

The Arts Building’s ivory white exterior comes from Mount Somers stone, while the Tower was made from pre-cast concrete. Art Nouveau influences are evident in the buildings decoration of New Zealand flora and fauna.

On a Saturday afternoon, the sun post a heavy rainstorm barely finding its way through a heavy cloud formation, a group of photographers, myself included meet outside the Clock Tower. We were lucky to have the rare opportunity to wander up and around the tower until we got to the top. The staff including security allowing us into the ‘no entry’ scaffolding area. 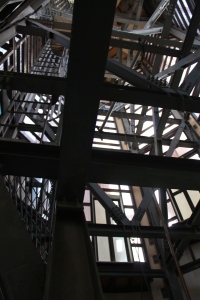 Inside the bowels of the Clock Tower

While it was fun opening windows and shooting down the tower, or hunkering down on the stairwell and photographing through lead light windows, the atmosphere was eerie. The tower felt lifeless. I wondered if it was a case of beauty without substance. Given the tower is a thoroughfare, both sides of the stairwell branch off into corridors leading to offices, I came to the conclusion that as there is no reason for anyone to sit or inhabit the space the walls of the building do not become impregnated with life.

Camera on camera action through the parapet windows

To me the Clock Tower felt like the equator between two hemispheres, no-mans land. In the case of the Clock Tower this in-between space defines an elegant building. One rarely seen in its full glory due to the surrounding shrubbery and trees.

Despite the lack of energy within the building it is without doubt a gem. One whose history adds a level of maturity and sophistication to our beautiful city.