“It is good to have an end to journey toward; but it is the journey that matters, in the end.” –  Ursula K. Le Guin, The Left Hand of Darkness

I’ve got the shoes, I’ve been walking with a backpack from my work to home all through the long hot summer months. I’ve bought my plane tickets. I just haven’t told anyone. Not quite sure how to do this given to date I don’t seem to have a sympatico relationship with the Camino.

I finally get it together, tell family and friends. No one was surprised.

“with 500-lifetime floors, you’ve reached the altitude of a helicopter. Hell-yes, you totally just did that!”

Although I was fitter than my previous two Camino’s deep inside me was a kernel of doubt, which I needed to still. I couldn’t let it sprout and blast-off into negative territory. The Way challenges both mentally and physically, the slightest bit of doubt will ferment, pouncing when you’re tired and expiring from the heat or alternatively when you are cold and wet.

Camino Forum and Camino Facebook group posts are in a panic. Four hundred Pellegrino’s have been arriving daily, for the past few weeks, into Saint Jean Pied de Port (SJPP). From memory, the bed capacity in SJPP was 200. Their advice was to book accommodation for the first stage. Especially as the municipal Albergue in Zubiri was closed.

Thankfully, I had already booked the first two night’s accommodation; Beilari and Refuge Orisson approximately 8kms walk from SJPP. It seemed strange to plan a short walk on the first day; however, it’s one of the toughest uphill routes on the Camino Frances. Plus, after the long, long flight from New Zealand, one night in Paris and two train journey’s I was going to be running on empty.

The first time around I walked from SJPP to Roncesvalles on the same day. By the time we arrived, I was in a world of pain. This time around, I was going to ease into it and hopefully, get to have some fun and make some Camino friends at Refuge Orisson.

Before departing Auckland, I managed to book a bed in Roncesvalles, Urdantiz (not too far from Zubiri) and Pamplona.

Arriving, by train into Bayonne…

The waiting room at Bayonne was busy but not overly crowded. With an hour to kill, I walked around the small town, went down to the river, sat on one of the benches and ate the baguette I’d bought in Paris. A low voice in my head said it’s time to go back to the train station.

Knowing French trains depart bang on time, I headed for the departure platform. The train was already there. Gone are the old train carriages, like the one in the movie The Way. The doors of this new and probably electric train were open. I boarded the front carriage, as the other one was full. A group of young Korean’s were spread out in the seats surrounding the bullet-point of the train. They shuffled around to make room for me, took my backpack and stored it up on the overhead rack. The train pulsated; the high notes of excitement and base undertones of trepidation.

The final departure announcement boomed into the carriage. Suddenly a swarm of people appeared on the narrow platform. The train was already full. Two young girls had taken over the stairs leading up to the front of the train. The conductor eyeballed them. Shook his head and with a deep and turned away. With a deep and forceful voice, he began to move the remaining people away from the doors. As the train pulled out of the station, I tried to count how many people had been left behind. This was the second and last train for the day. I was grateful to be onboard but gutted for those left stranded.

While the train was new, the throngs of people exiting and flooding into SJPP felt like the scene from The Way. We had all arrived – walked out of our dreams into reality.

I went straight to Beilari, my home for the night. The window in the room that I was shown to looked across to the Pilgrim Office, which meant I got to spend time with my roommates Jennifer and Yolanda, instead of waiting in the long line to get my Pilgrim’s Passport. It also gave me time to prepare my answer, to tonight’s and the next night pre-dinner question, “why are you here?” 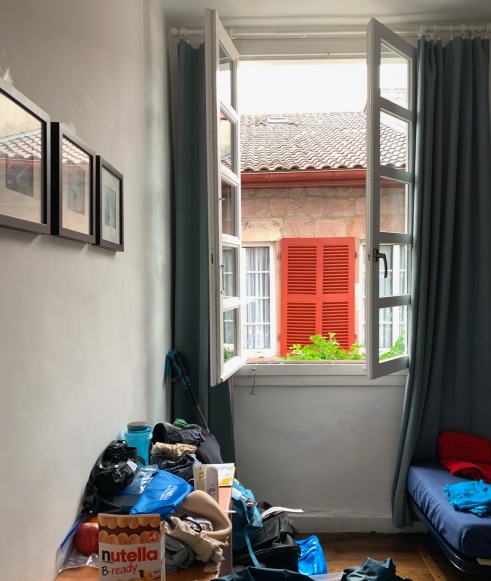 Joselu and his son hospitality were one of the highlights of my trip. They treated both guests and those who came for the evening meal as a family. Even though it was the end of their session, they exuded warmth and authenticity. I felt honoured to be their quest.

Thursday’s child has far to go…

I’m a lover of the spreadsheet. All my draft trips are entered into a spreadsheet, columns for dates, where I might stay, budget etc. When I started my Camino Frances draft itinerary spreadsheet, this nursery rhyme played in my head.

Monday’s child is fair of face

Tuesday’s child is full of grace

Wednesday’s child is full of woe

Thursday’s child has far to go,

Friday’s child is loving and giving,

And the child that is born on the Sabbath day Is bonny and blithe, and good and gay.

The next morning Joselu woke us up with a gentle tapping on our doors. Georgian chanting wafted along the corridor into our rooms, distilling the nervous energy that had welled up inside of me.

When I came downstairs, there were candles on the communal inside dining table, and a sumptuous choice of breakfast food, including fresh bread, honey and fruit. I would be leaving SJPP unhurried and spiritually on a high. Although it wasn’t the actual day of my birth, it was fitting that I was starting my Camino Frances journey on a Thursday.