“Fussing over food was important. It gave a shape to the day: breakfast, lunch, dinner; beginning, middle, end.”
– Robert Hellenga, Philosophy Made Simple.

“There is no sincerer love than the love of food.” – George Bernard Shaw.

I get excited about a leisurely breakfast because they induce that feeling of free-floating. And, as this day was our only full day in Lisbon, the day would be shaped by our choice of breakfast venue. Given this, we spent a lot of time researching our breakfast options. We settled on Fabrica Lisboa, a cafe on Rua da Madalena. It involved a short 15-20 minute walk. As we climbed the deserted Rua da Madalena and saw all the closed shops, my hopes of the perfect breakfast began to dwindle. Thankfully the cafe was open. Plus, we had arrived just in time to get the last unoccupied table.  Over the next forty minutes, a steady stream of people came, some lucky enough to get a table, others turned away.

Fábrica Lisboa offered a menu with a vast selection of breakfast foods. I ordered one of the freshly baked croissants and one of the delicious looking tarts that I had spied on the bakery counter.

Fabrica had taken this popular Portuguese dessert and turned it into a breakfast pastry. The pastry was light yet crisp without flaking all over my clothes. Underneath the slivers of apple, which had a slight citrus tang to them, the creamy texture of the custard was rich without being cloying, very smooth and oh so moreish.

Perfectly formed, skin cooked to the point where the brown had a caramel tinge, light to touch and then the tell-all bite. As I bit through the crust, the initial crunch gave way to the texture of a soft, perfectly cooked dough. Accompanied by the perfect espresso, I found myself once more comparing Lisboa to Paris.

If you are a foodie who enjoys vintage collections of cooking paraphernalia such as scales, bread boxes and tins, you will be in your element here. With a coffee machine that dates back to the 1950s, Fábrica Lisboa entertains as well as feeds.

“Escoffier, whose philosophy was, “Good food is the basis of true happiness.” – Macro Pierre White, The Devil in the Kitchen: Sex, Pain, Madness and the Making of a Great Chef.

Two of the things I love, Saturday Markets and Macro Pierre White, not only have food in common, but they can also elevate the dullest of days into something special. Not that I have met Macro. But I do know and love his husky voice.

After breakfast, Chrissy and I wandered through Lisboa’s inner suburb of Baixa, heading away from the Rio Tejo waterfront towards Rossio. At the border of the two suburbs, the five main streets of Baxia end and abruptly open onto two squares Praça da Figueira and Praça do Pedro IV. These two areas are separated by the grand statue of King John Estâtua Dom João I. The constant flow of traffic on the nearby slip road diverted our attention. As we turned around, we noticed trucks laden with produce navigating the narrow street. We became excited when we saw that they were heading towards a local market. We had stumbled upon Lisboa’s oldest market – Praça da Figueira. In 1755 the square had been home to the Todos-os-Santos (All Saints) Hospital. An earthquake had demolished the hospital; however, its ruins provided an ideal place for artisans and growers to sell their wares. Having seen the devastation of the Christchurch earthquakes (2010 & 2011), it was very reassuring to know that this vibrant, noisy Praça da Figueira market had emerged from the ashes and rubble of an earthquake.

I’m not a  fan of Sangri; however, the red velvet hue of the Sangria in glass jars had me salivating. We lingered, watching the stallholder cutting lemons. A tangy citrus smell was overpowering, nearly tempting me into buying a glass of white Sangria. As we left, I made a mental note to try white Sangria when we reached Porto in thirteen days. 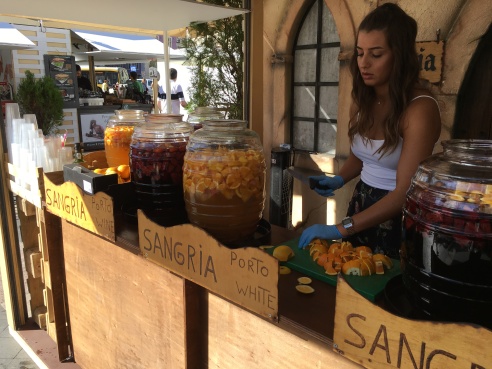 This cheese, made from untreated sheep’s milk, comes from the region east of Coimbra and the hamlet of Quinta da Serra da Gardunha, Fundao. For cheese lovers, I recommend Ursula Heinselmann blog heinzelcheese. She has a fantastic post, which explains the cheese-making process and the finished taste.

There is hardly a cloud in the sky as we reach the end of the cheese stall. It is still mid-morning, yet the temperature feels as though it has reached the mid-20s. Little wonder that these rounds of cheeses are melting within and exploding through their linen bandage wrappings. Both Chrissy and I are captivated by the cheese river heading for the table.

In her blog Catavion, Andrea Smith has The Ultimate User’s Guide to Portuguese Cheese – worth a read if Portugal is on your travel list. Unfortunately, we had yet to begin our cheese tasting journey.

The last members of our Camino family Mike and Lisa, arrived around mid-day. Despite the twenty-five hour or so long haul flights from Sydney, they were both ready to set off to get our Camino Credenciales and discover Lisboa.

Our journey to get the all-important Camino passport started at the nearby Cathedral Sé and led us off to another area of Lisboa, Chiado. After a hair-raising tuk-tuk ride, we arrived in Chiado. However, we struggled to locate Basílica dos Mártires, perhaps foretelling our upcoming daily navigation hurdles. With a combined effort and smartphone technology, we finally found the Basílica. We queued, handed over our passports and eventually received our Crediencial Del Peregrino’s. Time for lunch!

We had spied Café No Chiado with outdoor tables adorned with red tablecloths and a crisp white over-cloth from the tuk-tuk.

Lunch consisted of Prato charcutaria, Prato de queijos; finally, we got to try the cheeses and the dried meats we saw at the market. For Lisa, we ordered Padron peppers, white asparagus and for the table Tomate e Mozarella. Plus the all-important Vinho Tinto (Red Wine). Michael wisely asked for recommendations from the waiter. Such a great way to kick off our adventure.

This salad epitomised everything that we came to know and love about Portuguese cuisine. Fresh, primarily organic produce served without foams or sauces. Tomate e Mozzarella was elevated to another level by the addition of one ingredient; the strawberry. A quartered strawberry was placed on slices of fresh mozzarella, sun-ripened tomatoes, and a sprig of outdoor-grown green basil leaves. It was, as a friend of mine likes to say, “a taste sensation.”

I will be replicating this dish as soon as sun-ripened strawberries can be bought from my local market.

“Your body is not a temple, it’s an amusement park. Enjoy the ride.” – Anthony Bourdain.

When Chrissy told her friend Kyz we were going to Lisbon, she said we  MUST go to Belem. As it is home to the pastel de nata, the Portuguese egg custard tart pastry. And the bakery, Pasteis de Belem, is one of Portugal’s Seven Wonders of Gastronomy.

Belem via the riverside route is approximately seven kilometres from Praça do Commercio, the heart of downtown Lisboa. Therefore, we opted to take a taxi.

The taxi driver was keen to give us a guided tour of Belem’s monuments. However, when we saw the queue that stretched beyond the famous pastellaria front door, we declined. There was little shade cover on the pavement. Thankfully, the line moved quickly; however, inside, it was stuffy and frantic. Chrissy and Lisa stood shoulder-to-shoulder with other customers, gradually inching their way closer to the counter and the long-awaited six-packs of Pasteis de Nata.

Boxes of nata secured, we walked across the road to sit beneath large trees and devour the natas. Still warm, with light crispy pastry and egg custard centre velvety and smooth, these nata were, as the Portuguese say, the “bom.” For each nata, we had little packets of ground sugar and cinnamon (Canela). Apparently, the traditional way is to sprinkle on top before eating; Michael announces it’s a taste revelation. 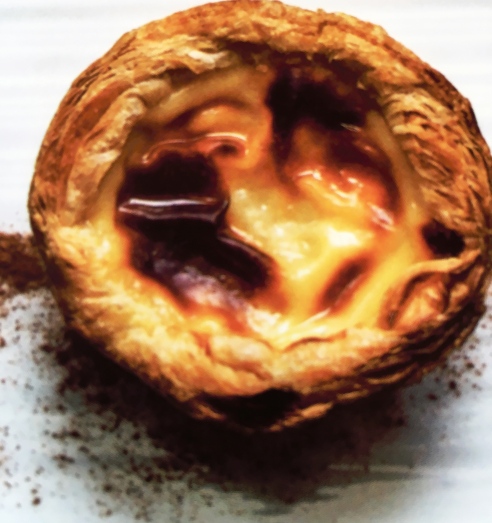 “One cannot think well, love well, sleep well, if one has not dined well.” – Virginia Woolf.

This was on Lisa’s must-do list and, as luck would have it located on the drive back from Belem. Our taxi driver advised that the best time to arrive would be around 9:30pm as it wouldn’t be too busy. It was heaving! People hovered beside stools inside the food court, ready to pounce the minute someone was about to leave. We had no choice but to follow suit. Leaving Chrissy and Lisa prepared to spring into action, Mike and I went in search of a couple of beers. The Super Brock Beer experience of buying a ticket and then standing in a queue to pour your own beer challenged our jet-lagged minds. Looking around, I spied food kiosks beyond the food court where you could buy a beer without all the hassle of waiting in line. Mimicking the locals, I sprung into action and secured four stools while Michael headed off to find the girls.

Once united, food and drinks ordered, we decided the chaos and heat inside was unbearable. By this time, jet lag had engulfed both my body and mind. I was over the idea of dinner and craving ice cream. However, there was no way that I would be venturing back into the food hall to buy ice cream. Plus, in less than eight hours, we would be starting a twenty-five-kilometre walk. So, no wonder I can’t recall what I  actually ate.